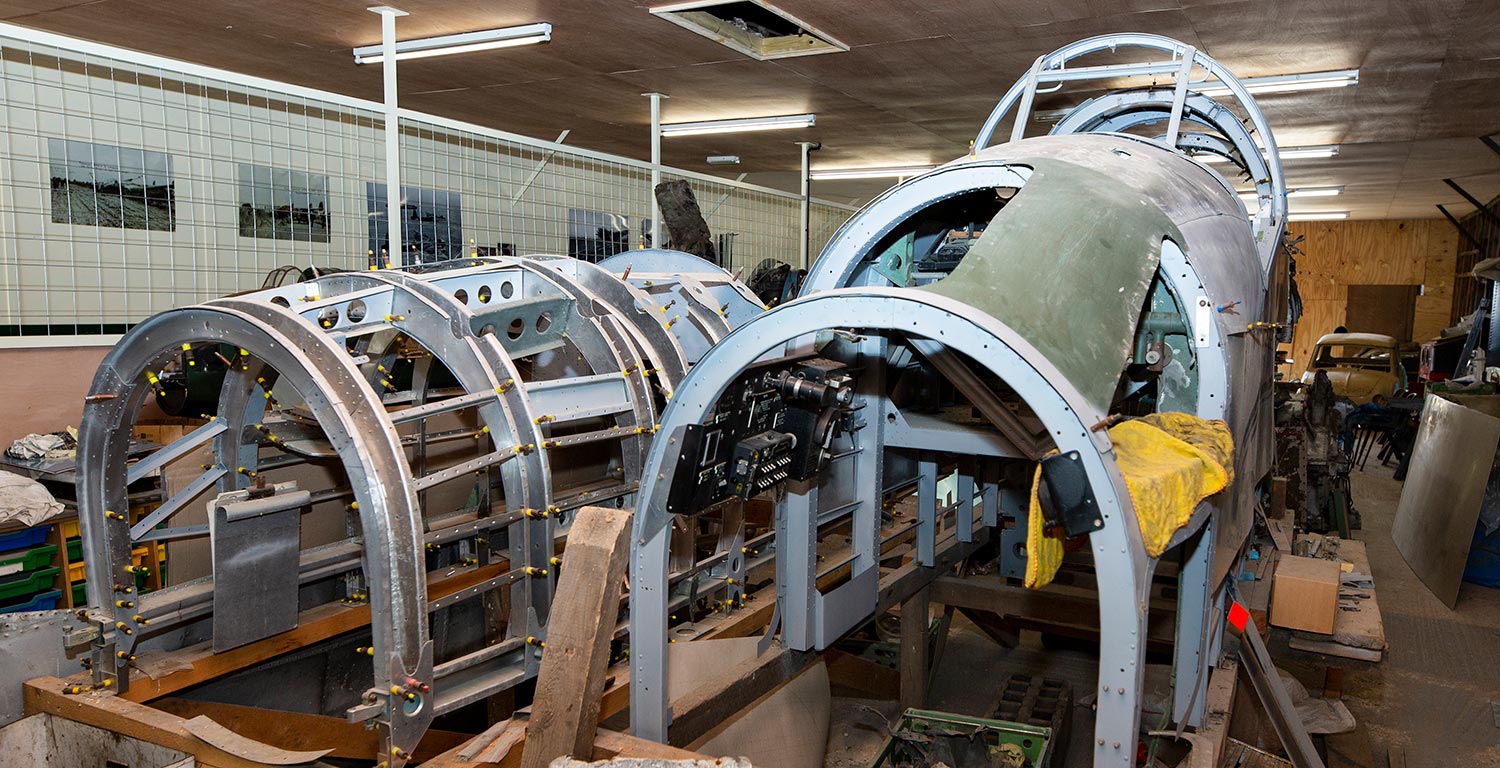 History of our aircraft

Home Lots To See and Do Aircraft Hampden
The Handley Page HP.52 Hampden was a British twin-engine medium bomber of the Royal Air Force (RAF).

It was part of the trio of large twin-engine bombers procured for the RAF, joining the Armstrong Whitworth Whitley and Vickers Wellington. The newest of the three medium bombers, the Hampden was often referred to by aircrews as the "Flying Suitcase" because of its cramped crew conditions.

There were 1,430 Hampdens produced but only 4 complete or parts remain.  AE436 is a T1 torpedo bomber and flew with 144 Squadron.

A rare example of one of the Royal Air Forces Second World War 'forgotten bombers', the Hampden and its twin engined partners in the form of Whitley, Wellington and Manchester bore the brunt of bombing operations against Germany during the early war years, serving with distinction until retirement from front line Bomber Command service in late 1942. With only one other Hampden under restoration to static display standard in the United Kingdom, this is an important, but very much a long term project by the Lincolnshire Aviation Preservation Society. AE436's formers and stringers are being rebuilt to original specification, with current work focusing on the bottom part of the nose section and the bottom front longerons. Once the top part of the fuselage has been joined to the bottom part, the focus of restoration will move to the rear fuselage, then tail boom, tail and wings.

Although the Hampden will be best remembered for its Bomber Command operations, the type also served in Coastal Command with 144 examples being converted to torpedo carrying TB.I standard. AE436 was one such conversion on strength with 144 Squadron Royal Air Force based at Leuchars, wearing the code PL-J.

As added protection for the Arctic conveys heading to the Murmansk region, 144 and 455 Squadrons were ordered to prepare for operations in northern Russia. During the evening of 4th September 1942 AE436 and its crew departed from their forward airfield at Sumburgh in the Shetland Islands for Afrikaner, a Russian airfield located near to the Finnish border. A total of 16 Hampdens from 144 Squadron took off for their transit of some 1200 miles, but due to a storm front AE436 went slightly off course over Sweden and struck Tsata mountain, 130 km WNW of Jokkmokk, during the early hours of the 5th September.With a crew of five onboard, the impact is thought to have instantly killed Pilot Officer Bowler and Sergeants Jewett and Campbell, with Pilot Officer Evans and Corporal Sowerby miraculously surviving the impact to be briefly interned by the Swedish military. To avoid a lengthy internment in Sweden, the two survivors told Swedish authorities that they had in fact crashed in Norway, some 15 miles from the Swedish border as a result of an attack by German aircraft. Evans and Sowerby went on to claim that they were initially captured by Norwegian and German soldiers, but after a night in custody they managed to escape along a mountain valley and into Sweden. It would appear the claims were believed as both survivors avoided internment in Sweden and were back in the United Kingdom by 21stSeptember.

AE436 was not 144 Squadron's only Hampden casualty during the lengthy transit flight. P1344, P1273 and AT138 were shot down, AE310 force landed due to fuel shortage and AE356 was accidently shot down by a Russian Hurricane. 455 Squadron's 16 aircraft fared little better during their transit flight, with AT109 making a forced landing on a beach near Vadso due to taking damage from ground fire and P5323 running out of fuel and crash landing; a third aircraft, P5304, also crashed in Sweden. After completing their mission in Russia, crews from both Squadrons returned home, however their 23 surviving Hampdens remained behind to serve with the Soviet Air Force.

The wreckage of AE436 lay on the mountainside until rediscovered in 1976 by the Västernorrland Historical Society. Following a funeral for the three deceased crew members at Kviberg Cemetery Göteborg, the wreckage was salvaged by the Swedish Air Force and returned to the United Kingdom. Initially the crated remains were stored at RAF Henlow until discovered in June 1987 by the late Brian Nicholls, a serving member of the Royal Air Force who was looking for a suitable restoration project. Having discounted restorations of ‘extinct’ types such as the Whitley and Stirling as unfeasible, Brian settled on bringing a Hampden back to life. The crated remains of AE436 were delivered to RAF Coningsby where the contents were examined, prior to the project making the short journey to East Kirkby where restoration started in earnest during 1989.

As a veteran of Bomber Command operations, having taken part in the first 1000 bomber raid against Cologne on 30th/31st May 1942, a restored AE436 will be a more than suitable hangarmate for East Kirkby's iconic Lancaster.

Built by English Electric at its Preston works, part of the seventh production batch ordered by the Air Ministry. Taken on Charge 17thOctober 1941; To 44 MU, then 408 Sqn RCAF, RAF Syerston. Suffered undershoot and undercarriage collapse 15th November 1941 , declared Cat R(b). With 13 MU 20th November and repaired by 21st February 1942 when with RAAA. To 44 MU 8th March and returned to English Electric for TB.I modifications 8th April. Delivered to 144 Sqn at Sumburgh 2nd May 1942; Reported as missing 5th September and Struck off Charge 24th September 1942.

The three Canadian airmen who died on Tsatsa Mountain were:

A total of 1,430 Hampdens were built: 500 by Handley Page, 770 by English Electric and in Canada by the Canadian Associated Aircraft consortium (although some were retained in Canada, 84 were shipped by sea to the United Kingdom). Almost half of the Hampdens built, 714, were lost on operations with 1077 crew killed and another 739 missing. German flak is believed to have accounted for 108 aircraft and 214 others were classed as failed to return. Luftwaffe pilots claimed 128 Hampdens, with 92 shot down by night fighters. Finally, 263 Hampdens were written off through a variety of crashes and incidents. 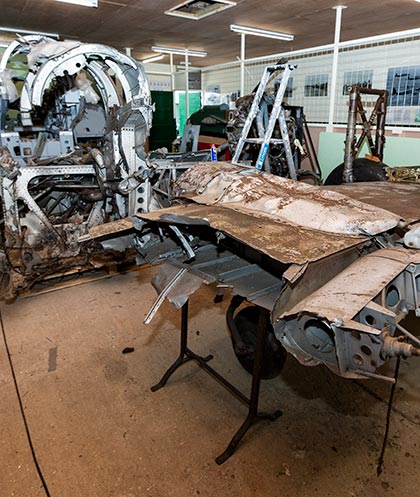