A radio trainer and communications aircraft

Home Lots To See and Do Aircraft Proctor
The Percival Proctor was a British radio trainer and communications aircraft of the Second World War.

The Proctor was a single-engined, low-wing monoplane with seating for three to facilitate the training of Wireless Operators during WW2.

A long term restoration project residing at East Kirkby, in the capable hands of the Lincolnshire Aircraft Preservation Society, is Percival P.31 Proctor Mk.IV NP294.This particular model of the successful Proctor family was utilized as a three seat radio trainer during World War II and was equipped with the T/R1154/55 radio installation, mounted in a cradle to the right of the pilot. As you will note from the images below, the radio operator had a footwell within the spar box of the centre section and a third seat was provided behind for a third passenger.

Built in 1944, NP294 is a unique survivor from a batch of 258 Mk.IVs. The aircraft saw wartime service with No.2 Radio School at RAF Yatesbury and No.4 Radio School at RAF Madley. Following retirement from RAF service the aircraft avoided sale on the civil market and interestingly retained its radio training fit until rediscovered lying in a hedge in a private garden near Stockport. The aircraft was apparently being used as a child’s plaything!

Currently on public display in the United Kingdom are two other military Proctors, both examples of the Mk.III; the Royal Air Force Museum, Hendon has Z7197 and the Imperial War Museum at Duxford has LZ766.

Although a long term restoration project, NP294 which was a restoration started by Tim Stone until his passing in February 2021, is currently having its fabric work completed. The aircraft will eventually go on display in the main hangar, alongside Avro Lancaster NX611, and very much in the future, Hampden AE436. 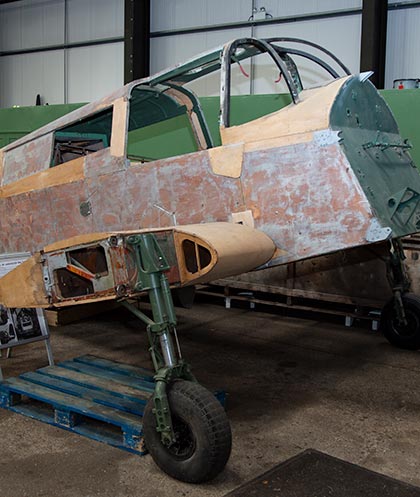