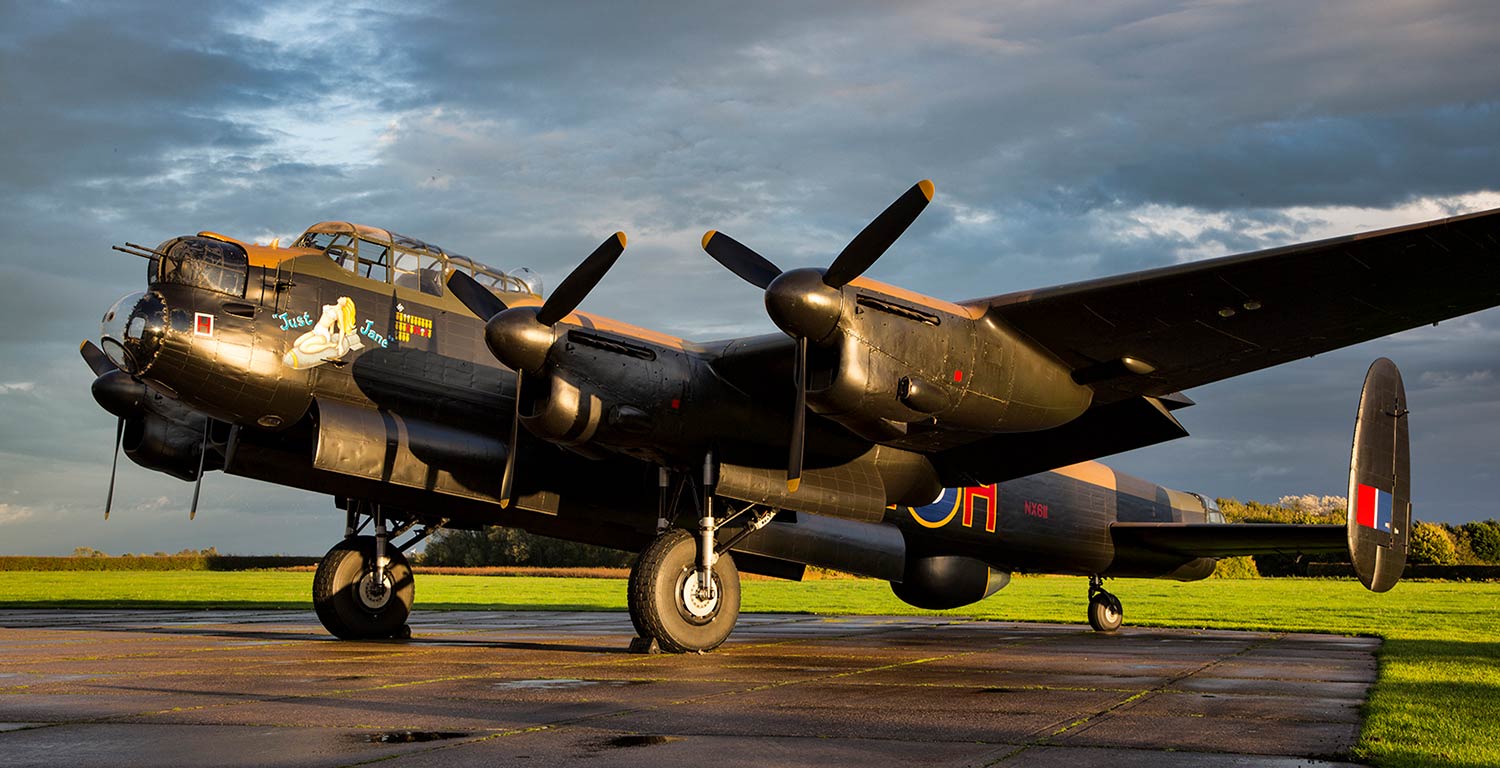 Home Lots To See and Do Aircraft Lancaster
The Avro Lancaster is the most famous and successful RAF heavy bomber of World War Two.

The centrepiece of our museum is Avro Lancaster NX611 'Just Jane'. NX611 is one of only three working Lancasters worldwide.
NX611 is currently in taxying condition but is being restored to airworthy condition.

The Avro Lancaster Bomber is perhaps the most iconic aircraft of World War Two, most famous for dropping the bouncing bomb during the Dambuster's raid. It was the pride of Bomber Command from when it entered into operational service in 1942. 7,377 Lancasters were produced and over half of them were lost over the course of the war. The Lancaster's bomb bay was versatile and could carry a combination of loads. With some adaptation it was the only aircraft to be able to carry the 22,000lb Grand Slam bomb, the largest bomb to be carried by an aircraft in the war.

A four engined heavy bomber the Lancaster was powered by four Merlin engines (with the exception of the MkII) with a 'usual' crew of 7 men. 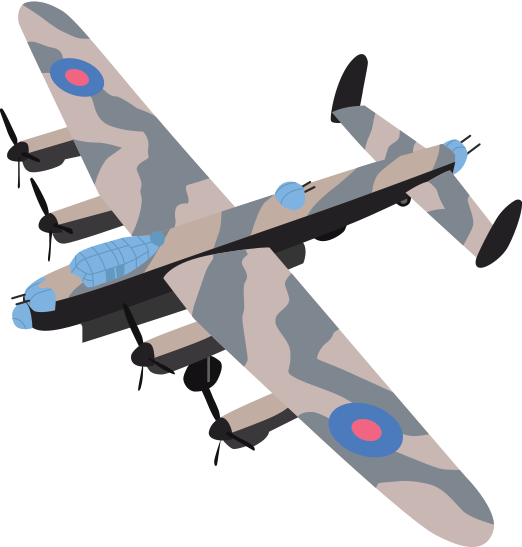 The bomb aimer and front gunner

The bomb aimer drops the bombs and helps the navigator by identifying geographical features.  He also operates the front turret which has two .303” Browning machine guns.

The mid-upper turret on NX611 would have been an electrical Martin CE250 turret with two .5” machine guns.  The mid upper gunner has a 360 degree view from this position.

The pilot is the captain of the aircraft regardless of rank.  He is responsible for safely getting the aircraft to the target and home again.

A post war position on NX611 this is where the rest bunk would have been on an operational Lancaster.  However, the aircraft of 101 Sqn had a special operator on board operating a system called Airborne Cigar (“ABC”) which would have been positioned in this area.  ABC was a radio jamming system used to disrupt communications between German fighter controllers on the ground and the night fighter pilots.

Situated alongside the engines the wireless operator used the T1154 transmitter and the R1155 receiver and was able to communicate by morse code.

The largest position on board the aircraft the navigator is curtained off from the rest of the crew with a large desk to lay his maps on, he uses navigational equipment such as Gee and H2S.

Seated beside the pilot the flight engineer is in charge of the engines.  He assists the pilot on take-off and is responsible for the engine running and fuel consumption.

The History of ‘Just Jane’

"Just Jane" was built by Austin Motors at Longbridge near Birmingham, in April 1945. Given the serial number NX611, she was one of the first 150 B Mk VII Avro Lancasters destined as part of the RAF's Tiger Force in the Far East. However, Japan's early surrender meant these aircraft were suddenly surplus to requirements and, instead of seeing service, NX611 ended up in storage at Llandow. There she stayed until 1952. From then on, a chequered career followed.
In April 1952 she was bought by the French Government. Painted midnight blue, she flew maritime patrol for the French Naval Air Arm. Ten years later, she went to Noumeau, New Caledonia, was painted white and used for air sea rescue and cartography. Then in 1964, the French presented her to the Historical Aircraft Preservation Society and flew her to her new home in Sydney where she was overhauled before being flown back to Britain. It took nine days to complete the 12,000 mile journey back to her homeland- seventy flying hours- landing at Biggin Hill on 13 May, 1965.

Temporarily grounded, due to expiry of permitted flying hours, it was 1967 before NX611 flew again, but even then public appearances were brief because of prohibitive costs.
She was flown to Lavenham in Suffolk and, a few years later, in 1972, was put up for auction at 'Squires Gate', Blackpool.

Meanwhile, in Lincolnshire, determined to commemorate the death of their brother Chistopher who was killed on the Nuremburg Raid in March 1944, and all of the men who served in Bomber Command, Fred and Harold Panton had decided to purchase a Second World War Bomber. At one time, they had had their eyes on a Halifax which was coming up for sale, but their father told them, in no uncertain terms, they would not be permitted to keep one at his farm.

The years passed, but the brothers still held on to their dream. Eventually, Fred and Harold became co-owners of their own farm. When some land came up for sale which included part of the defunct RAF East Kirkby airfield they bought it. Some areas of concrete and a few buildings still stood on the old airfield, in a state of disrepair. They used part of the area to set up a poultry farm. However, with the idea of owning an exhibition aircraft still foremost in their in their minds, they also began to renovate the "working area" of the airfield. That included building a new hangar, where an original T2 hangar had stood during the war years.

Learning about the forthcoming auction, via an advertisement, Fred and Harold decided to try and purchase the old Lancaster. This aircraft could be the perfect monument to their brother's memory. When Fred saw NX611 for the very first time at Blackpool, she stood lonely and forlorn, waiting to be auctioned off to the highest bidder. Around her, a great crowd stood- some hopefully putting in bids, but most just watched- curious to see one of the country's finest types of Bomber at close range. Sadly, due to the reserve not being reached, she was withdrawn from the auction and later privately sold to the Rt Hon Lord Lilford. Fred and Harold kept in contact with her new owner and eventually, whilst she stood Gate Guardian at RAF Scampton, near Lincoln, and after one or two hiccups in the furtherance of their ambition to own her, a deal was struck with Lord Lilford's agent.

In September 1983, NX611 was finally purchased by Fred and Harold and, four years later, after completing an agreed total of ten years gate guardian at RAF Scampton, she was brought to East Kirkby, courtesy of the RAF. It was sixteen years since Fred had seen her at Blackpool auction.

The first moves towards restoring one of her four engines were made in 1993. Two ex RAF engineers were brought in to do the job. They began work on No3 engine. Although it had been idle for 22 years, they were confident they could bring it back to life. Accessing the spare parts was organised, the engine rotated to ensure it would still turn and the cam shaft covers removed. Both camshafts had to be replaced, although the engine cylinders were in good working order. Then the propeller was removed, stripped down and examined and - apart from having to adjust the blade settings - everything proved to be in fine order and was rebuilt.

Local contractors were brought in to check the wiring and make good where necessary. That alone was a ten-day job.
The engine's starter motor, magnetos, fuel booster pump and ignition harness were removed and checked, the fuel tank was pressurised and the fuel jettison system reset. When the throttle controls between the cockpit lever and the engine were uncovered, it was discovered that almost a third of the small control rods had to be replaced.

However after about seven hundred man hours and at a cost of £7,000 the engine was finally ready.

This work was then completed for all four engines and NX611 is now at a fully operational taxiing standard. 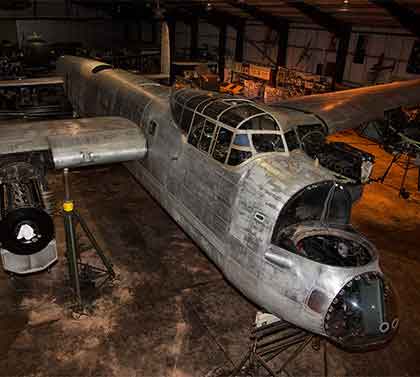 The Lancaster NX611 is in her third year of an 11 year plan to painstakingly restore the aircraft back to airworthiness. Our dedicated team of engineers are focusing on a section of aircraft for restoration each winter period. You can keep up with the progress with weekly winter reports by joining the Rivet Club .