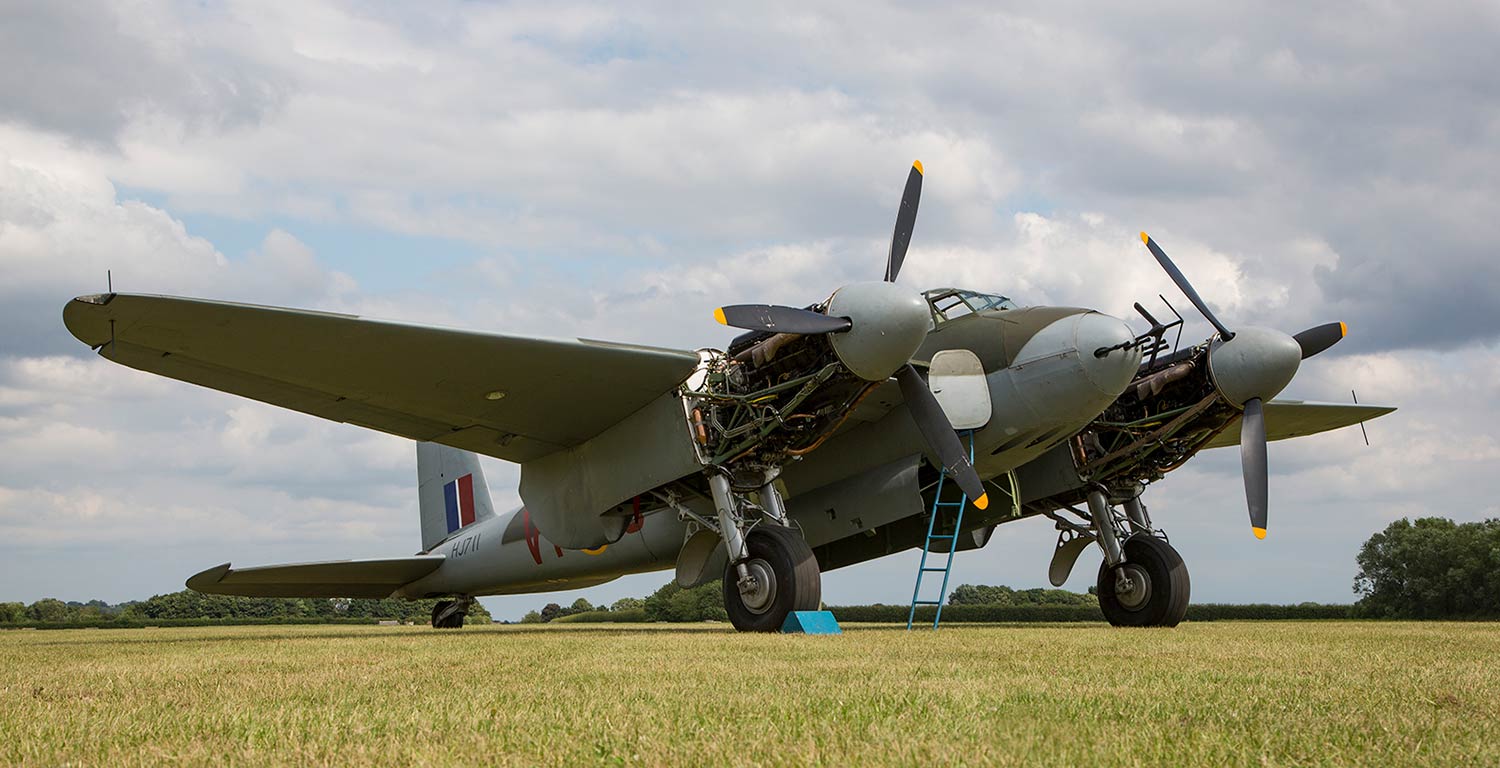 A truly fascinating restoration of a de Havilland Mosquito NF.11.

This is a truly fascinating restoration of a de Havilland Mosquito NF.11. The restoration is also unique as it's the only existing version of this variant in the world.

After nearly 40 years, the restoration has become Tony's life work. Tony has truly created something very rare and exceptional, all without any financial backing. It's difficult to comprehend the amazing lengths to which he has gone to over the years to find and obtain so many essential elements. Scrap yards, crash sites, disused airfields, industrial warehouses and with the generosity of many aviation enthusiasts and friends, parts have been obtained from Canada, America, New Zealand and Australia. All combined to provide the vast array of parts. Even the most ardent aviation enthusiast will be amazed at the great resourcefulness, single minded determination shown by Tony throughout this restoration, overcoming personal tragedy, almost impossible logistical problems, scrimping, saving, scrounging, bartering, rummaging and working very long hours and sometimes in very discouraging conditions.

Tony located the remains of B.XVI PF498 which had been allocated to Kirkham airfield on the 6th October 1948. On the 6th June 1955, it went to the Civil Defence Unit , Royal Ordnance Factory, Chorley, Lancashire, where it was used for crash rescue training, The ravages of this role explain why when Tony first came upon the aircraft the only substantial pieces left were a section of the wing undercarriage assemblies.

On April 29th the cockpit was purchased at an auction in Blackpool for the princely sum of £7. Also obtained was a rudder for just £2, aileron and rudder pedals.

After the war, the cockpit spent some time with the Air Training Corps and a scout group, before resurfacing at the Reflectaire collection in Blackpool. At that time the information relating to the history of the cockpit was that it was NF.II HJ711.

HJ711 had served with 141 and 169 squadrons. While with 169 squadron based at Little Snoring in Norfolk, HJ711 made the squadrons first kill on January 30th 1944. The pilot, Squadron leader J.A.H. Cooper, shot down a Messerschmitt BF110 whilst patrolling west of Berlin.

After obtaining permission from 169 squadron it was thought appropriate to adopt the squadron and the serial number of HJ711.

On the return journey from Blackpool Tony deviated to Chorley in search of the undercarriage assemblies and wing sections located earlier. Having previously obtained permission to remove the wing, prompt removal was required otherwise it was the intention to clear the site by burning the aircraft remains.

A friend of Tony's discovered the port and Starboard wing remains from T.III VA878 which had lain derelict in St. David's, South Wales since 1956. On close inspection, Tony found the remains in a poor state, cut off the port wing section and duly transported it home.

Now, with undercarriage, wings and cockpit the task was to find a fuselage.

Tony, along with its owner, Eddie Renolds, salvaged the remains of TT.35 RS715 from a deserted film lot behind the MGM studios at Boreham Wood. RS715 had in fact been used in the making of the film 633 Squadron, but sadly was left abandoned 10 years after filming ended. Eddie generously parting with it without payment and thus the fuselage had to be transported back to York, this been done by a trailer and Tony's ever faithful Singer Vogue, cockpit and fuselage came together for the first time in Tony's driveway.

Jim O'Sullivan wrote to inform Tony that they had recovered an ex-141 squadron Mosquito near Kings Lynn, Norfolk. Thus a pair of needle blade propellers, albeit bent from the crash, joined the Huntington hoard, as did tailplane elevators and other sundry items.

Two Merlin 76 engines became available, the first good engines to become available on the market, were added. Theses came from NF.30 NI616, which had been scrapped at Cosford. Later, however, in a complicated three way deal, Tony was able to acquire the correct engines for HJ711, namely two Merlin 25s. Other parts arriving from all over the country was a pilot's seat from a scrap yard in Warrington.

The Mosquito project took a giant step forward when Tony exchanged the stifling working confines of the garage and driveway of his suburban bungalow for the relatively spacious accommodation offered by the Yorkshire Air Museum.

Tony also acquired a towing browser, accumulator and Fordson tractor. The Fordson needed a good deal of work since it's retrieval from a dealer's yard in Ripon.

With reference to the Mosquito herself, much had been restored since HJ711 moved to Elvington. Work had been carried out on the ventral doors which had to be mostly rebuilt and the fittings recast. The tail wheel undergoing restoration, the undercarriage totally stripped and the top castings replaced. Also many repairs were done to the fuselage, but much was still required at that time. The nose also needed attention. Unfortunately at that time the only drawings available to Tony were from the Mosquito Museum's FB.V1, a mould of which was taken from the inside, in concrete. Substantial internal drawings were vital at that time for work to carry on in that area, these became available at a later date.

Tony has also bought a pair of radiators for the Merlins and a trip to Gloucestershire produced several engine fire-walls and general fittings, all in amazingly good condition after almost 45 years in a gravel pit.

A visit to a derelict farm in the wilds of Lincolnshire found several Mosquito wheels and tyres, a good friend travelled to Glen Esk ,Scotland to bring Tony and Val back a very well preserved engine nacelle and other smaller items from a crashed Mosquito. This was the former FB.VI HJ720 which had been re-registered as G-AGGF upon transfer to BOAC for the high speed runs to Sweden.

New Zealand was the source of another nose cone, cannon frames and escape hatch with the help from the De Havilland Heritage Centre.

Then still in 1989 Tony made public his ambition to have the completed Mosquito out on the perimeter track in time for the 50th anniversary of the first flight of the De Havilland Night Fighter prototype in 1941. He felt it would be a worthy tribute to all the Mosquito personnel and aircraft that were lost during the war, It would also honour the many thousands of ground-crew who worked so hard, very often in such trying conditions, to keep the squadrons operational.

The first Mosquito wing construction since factory production finished all those years ago. Much of the wing is composed of original pieces and many of the fittings are war-time.

May 15th 1991 - MOSSIE DAY, saw HJ711 on three wheels for the first time in over forty years, when she was wheeled onto the perimeter track at Elvington to greet the only flying Mosquito in the UK, RR299 owned by British Aerospace at Chester and flown in especially by Peter Henley. The date was particular significant as it was exactly 50 years after the first flight of the Night Fighter Prototype Mosquito, W4052.

Many visitors to the museum that day included six pilots and navigators of 169 squadron, HJ711 pilot, Joe Cooper, amongst them. Joe had a very good day recollecting his experiences.

Mossie day was a day that would be etched into the memories of all involved and all who attended.

Tony made the decision to move HJ711 to the Lincolnshire Aviation Heritage Centre in order to further the restoration to a ground running condition. 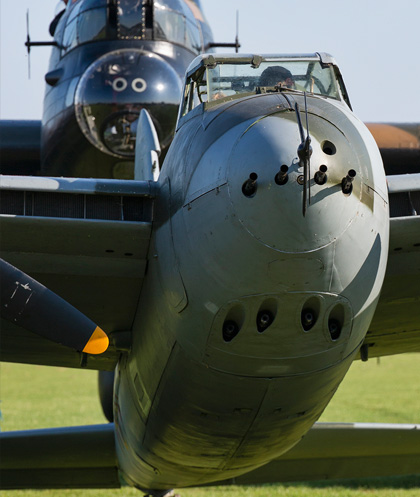