and the history of Lincs Aviation

Home About Us Who we are
Who we are

The Lincolnshire Aviation Heritage Centre is a family run museum and was set up in 1989. It is now widely seen as a living memorial to the 55,573 men of Bomber Command who lost their lives during WW2. It holds two of the rarest aircraft, an Avro Lancaster Bomber MKVII and DH Mosquito NFII, in its collection along with many wartime vehicles including a Ford WOT1 Crew Bus, the only one of its kind in existence.

We feel that Bomber Command has never been given the recognition that it deserves and we see it as our job to educate both old and young as to the acts of heroism and dedication shown by Bomber Command throughout the Second World War.

The average age of air crew, each man a volunteer, was 22 and not even 1 in 4 completed their first tour of 30 operations, most definitely a debt that we cannot repay but also a debt that should not be forgotten.

We are based on the old wartime airfield of RAF East Kirkby. We retain the original 1940's Control Tower and our Hangar is built on the original wartime hangar base.

Our Museum is built up entirely around RAF Bomber Command but the exhibits and displays span many areas such at The Home Front and Escape and Evasion giving you a wide perspective on wartime Britain and the trials and tribulation of the Second World War.

The Museum is expanding every year and it is our common ambition to fully rebuild it to a complete original wartime airfield preserving the memory of Bomber Command for many years to come.

Panton Bros Museum Unlimited T/A The Lincolnshire Aviation Heritage Centre is a family run business operated to promote and remember the sacrifice and service of RAF Bomber Command during WW2. The Centre reinvests any operating profits back into the Lancaster and museum site whilst offering employment to over 20 members of staff. 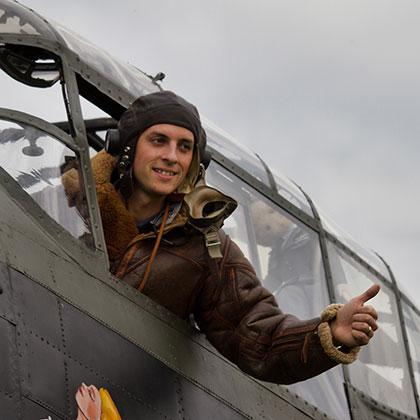 “If one person leaves the Lincolnshire Aviation Heritage Centre with a better knowledge of Bomber Command, their losses and what they gave for our country then we are one step closer to repaying our debt to them”

More about the Museum

Meet the team that keeps Bomber Command's memory alive by keeping the aircraft and museum operating.